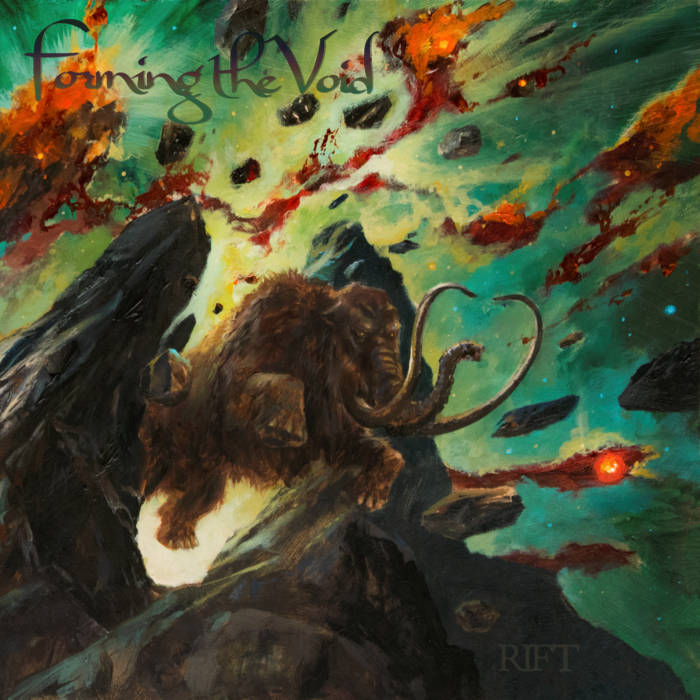 Smekermann This is doom I can get behind. I feel like getting into the intricacies of the music would run way over the character limit, so let me just say that this is amazing psychedelic doom backed by a great vocalist who can match the intensity of the riffs herein. The songs that hit hardest for me are Transient and Ark Debris - the riff progression in Transient is just so fucking satisfying, and I love the atmosphere in Ark Debris, and the way the heavy isn’t introduced until about halfway through. Favorite track: Ark Debris.

Douglas Sludgy and thick like a meaty thick stew for your ears Favorite track: Arrival.
more...

#1 on Doom Charts August 2018 #2 for 2018
"Forming the Void absolutely dominated the charts this month with 18 votes on 29 lists, many high on the individual rankings. Moving up from the #9 spot last month prior to the album release, its clear the fans and critics hear something special, and seeing them live in Vegas plus meeting and hanging out with the dudes its clear they are on the right path."
doomcharts.com/2018/09/01/doom-charts-august-2018/

"Lousiana's Forming the Void is one of stoner metal's best-kept secrets. Last year's Relic was a potent blend of sludge, stoner and prog, accentuated by phenomenal songwriting and damn-near radio-friendly tunes that put most radio rock to shame." - Aaron (Metal Injection) www.metalinjection.net/av/full-album-stream/forming-the-void-channel-the-classics-on-new-album-rift

"Forming The Void are set to crush all-comers with this follow-up to their much-lauded third album Relic. Immense, imperious and armed with megaton riffs, Rift is an admirable sequel to the genre expansions of Relic and a major step forward in terms of production. There's nothing quite as odd as their sludgy cover of Kashmir this time round, but in Extinction Event, Ark Debris and glacial 10-minute closer Shrine and the rest they've created an album that ranges from shamanic atmospherics to vast, tectonic bruisers, all the while twisting the archetypal
stoner sound to their own nefarious ends."-Essi Berelian (Classic Rock Magazine)

"Rift is a different album to Relic. It may have similar sounds and ideas. However Rift takes you on a more personal and spiritual journey. The production on Rift is simply first rate. With the album sounding fresh and super heavy from the start.Relic made me a fan of Forming The Void's music. However Rift has made Forming The Void become one of my favourite bands. Rift will be considered as one of the best albums of the year. Simply unmissable." - Steve Howe (Outlaws of the Sun)
outlawsofthesun.blogspot.com/2018/07/forming-void-rift-album-review.html

"Mountain-like riffs are propelled by the rhythm section – unstoppable bastards with searing solos that get the neck muscles working overtime. Cleanish vocals drenched in reverb float to the front of everything which ties in nicely with the psychedelic passages that weave in and out of the sonic prayers being offered here." -Tony Maim (Stoner HiVe)
stonerhive.blogspot.com/2018/07/forming-void-rift.html

"You like riffs? You like soaring melody? You like a bit of space-talk with your riffs and melody? You like albums with a mammoth flying out of a volcano on the cover? Then you’ve come to the right place: step right up and witness Rift."- Matt Butler (Echoes and Dust) www.echoesanddust.com/2018/08/forming-the-void-rift/

"I’m sorry, but any record that starts with a song called “Extinction Event” is telegraphing its heaviness. And sure enough, Rift is the most weighted offering yet in the relatively brief but prolific tenure of Louisiana four-piece Forming the Void." - JJ Koczan (The Obelisk) theobelisk.net/obelisk/2018/07/27/forming-the-void-rift-review-premiere/