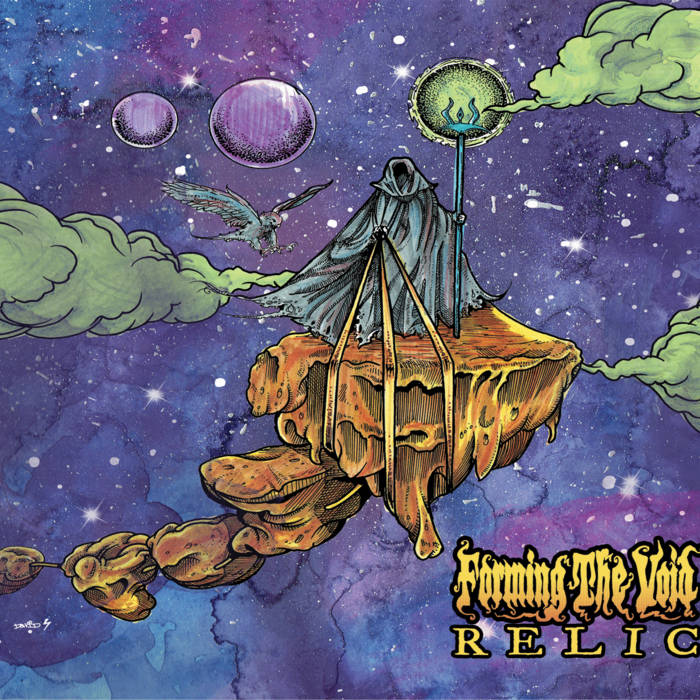 Douglas Thick and sludgy like a thick meaty stew for your ears Favorite track: The Witch.

Darknight Absolute stoner stunner, I cannot stop listening to this banger of an album. One word comes to mind to describe Relic, MASTERPIECE. Forming the Void is now one of my fave bands. Favorite track: Relic.

"Progressive sludge metal that’s dynamic, engaging and doesn’t get too swept up in itself is hard to come by — so many bands try, and fail — but Louisiana’s Forming the Void have done a fantastic job on their new effort Relic." - Vince Neilstein (MetalSucks)
www.metalsucks.net/2017/03/29/unsigned-and-unholy-forming-the-void-anhedonic-sisters-of-suffocation/

#6 on Doom Charts for February 2017 and #4 in March
"Forming The Void have taken things to the next level with their new album “Relic” filling every nook and cranny of its eight songs with a dark, and at times mouth dropping. array of deliciously dank lysergic groove all furnished in swathes of slow, low distorted guitar riffage, brutal thrumming bass and earthshaking percussion. Over this humongous tsunami of raw progressive tinted stoner metal are floated powerful cryptic and mystical lyrics sang with strength and passion, slightly monotone but clean and delivered with a power to match the tumultuous heavy grooves surrounding them. All this and an absolutely barnstorming version of Led Zeppelin’s “Kashmir”, what more could a discerning stoner doom fan possibly ask for…
~ Frazer Jones (Desert Psychlist)"
doomcharts.com/2017/03/01/doom-charts-for-february-2017/

"Their production is steadily geared toward maximum largeness, but the band does work effectively within that to enact a scope between the various tracks. Admirable in intent, but more satisfying in the actual sound, and more so on repeat listens." - The Obelisk
theobelisk.net/obelisk/2017/03/01/forming-the-void-relic-unto-the-smoke-premiere//

"This is one of those albums where everything counts, where each word, guitar lick, riff, bass line and drum roll fills an important part. To say Forming The Void has set the bar high is obviously an understatement. Still, there are songs that stand out more than the others, not that the unmentioned are bad. Hell no! Like I said earlier, this is one of this decade's best albums which means there's nothing bad on here. Regardless, one of the most complete songs on 'Relic' is 'The Witch'. This composition contains pieces, moods and references to the entire album and to let it end this amazing wax is a stroke of genius. Tying all that this album is into one composition and put in the end gives the perfect closure, if you ask me." - Håkan Nyman, (Outlaws of the Sun)
outlawsofthesun.blogspot.com/2017/03/forming-void-relic-album-review.html

"No matter your level of tolerance for slow, naturalist metal, your attention is locked down by Forming The Void. Sure, it takes seven minutes for a conventional pop song like album opener “After Earth” to run its course at a magmatic (not glacial) pace, it’s the best pop song you’ve heard in weeks — and the least awesome among seven others, including a daring, triumphant recasting of just the most iconic song ever. Crank it up!" Anso DF (Metalsucks)
www.metalsucks.net/2017/03/17/shit-that-comes-out-today-march-17-2017/

"good fuzzed-out stoner doom with those soaring vocals that are starting to permeate the genre. Its psychedelic nature is constantly present but not overbearing.."
-Joaquin Stick (Toilet Ov Hell)
www.toiletovhell.com/sludge-progs-the-doom-psychedelicly/

" The vocals are definitely reminiscent of The Sword (and, therefore, of Sabbath). Unlike The Sword, however, the riffage here doesn’t feel retro. With a smoother distortion sound and growled vocals the exact same song would be a groovy death metal number. “Bialozar” seems to rock harder than the songs on their previous effort, Skyward, and I find that to be an improvement. I like my stoner rock to be on the heavier side. Speaking of heavy, a bialozar, as it turns out, is a giant bird in Polish mythology. That’s pretty rad, and I like seeing stoner lyrics that aren’t about Vikings or Chutlu every once in a while. Honestly, my biggest complaint is that I don’t think the bass guitar is quite loud enough, and that’s pretty minor. It’s only one song, but I like it. B+" - Alex Makuch (Indy Metal Vault)
www.indymetalvault.com/2017/02/24/album-preview-forming-void-relic/

"Imagine a band formed by John Dyer Baizley, Scott Kelly and Troy Sanders. They might sound like the last album Forming The Void. However, it is still considerable simplification. On the "Relic" densely is not only the atmosphere, but also a different kind of inspiration. For example, solówkowa guitar in the opening puck Afterearth 'like what we hear on the penultimate album Paradise Lost. Probably everyone will find at the "Relic" slightly different paths and inspiration. I find it a little assertiveness known from previous albums Mastodon, Neurosis weight and vocals inspired by the Baroness. What you will find there may be something completely different." - Michael (Metalurgia)
metalurgiafm.pl/2017/03/20/przeglad-subiektywnie-najciekawszych-premier-plytowych-13-19-iii-2017/

"When Lafayette, Louisiana architects of groove Forming The Void released their debut album "Skyward" in 2015 it was wondered if the band may have raised the bar too high, such was the magnitude of their heavy sludged slightly prog-ish , stoner doom refrains it was hard to see how they could possibly follow up something so intense and powerfull! Thankfully these reservations have proven to be unfounded as just one listen to the bands brand new album "Relic" (Argonauta Records) will bear witness. Forming The Void have taken things to the next level with their new album “Relic” filling every nook and cranny of its eight songs with a dark, and at times mouth dropping. array of deliciously dank lysergic groove all furnished in swathes of slow, low distorted guitar riffage, brutal thrumming bass and earthshaking percussion. Over this humungous tsunami of raw progressive tinted stoner metal are floated powerful cryptic and mystical lyrics sang with strength and passion, slightly monotone but clean, and delivered with a power to match the tumultuous heavy grooves surrounding them. Songs like "Bialozar", "Plumes" and title track "Relic" are filled with swathes upon swathes of swirling atmospheric texture and colouring these elements combing with the heavy metallic grooves and lyrical content to take listeners on heady psychedelic tours through smoke filled landscapes populated by mystical creatures spreading leathery wings over towering stone mountains All this and an absolutely barnstorming version of Led Zeppelin’s “Kashmir”, what more could a discerning stoner doom fan possibly ask for." - Frazer Jones (Desert Psychlist)
stonerking1.blogspot.co.uk/2017/03/forming-void-relic-review.html

"The artwork to Forming the Void's second release depicts a cloaked figure carrying a trident, riding a harnessed piece of earth with a chain of other rocks through the cosmos with a hawk by it's side; it's dark, psychedelic, and perfectly encaptures the slow driving riffs that this Louisiana band deliver with a blunt knife to the temple.

Opening track 'After Earth' slowly picks you up on a dust cloud, sailing through the atmosphere of hazy drones and soothing guitar picks before delivering it's crushing blow of stoner/doom riffs like a creeping tsunami. The vocals of James Marshall are really refreshing to listen to as they avoid the typical stoneresqe gruff shouting vocals, but instead have a more 90's grunge tone to them as the guitars chug away in the background to a pulsating beat. The band lay the doom ethic on as thick as they do the crushing stoner,and it's a combination which is all encompassing, at times soaring with touches of psychedelia, and others the slowest of doom.

'The Endless Road' has similarities with bands like Sergeant Thunderhoof, with thick layers of crushing riffs building upon progressive musicianship with becomes quite captivating to listen to. 'Bialozar' is straight up powering stoner metal with attitude and we just cannot stop throwing fists at the fuzzy guitar riffs with smiles on our stupid faces. Forming the Void aren't necessarily breaking boundaries with their music, but they are doing the best possible versions of their genre that they could hope for.

The rest of the record simple continues to just fucking destroy you, with each pulverising guitar riff of 'Relic', the psychedelic hammering of 'The Witch', and the menacing doom of 'Unto the Smoke', all beating you black and blue, just so they can soothe you with an absolutely killer version of Led Zeppelin's 'Kashmir' to close the record, seriously, you've got to hear this track! Relic is a superb stoner/metal/doom record which will be getting many many many a repeated listen at Heavy Planet HQ. Go and listen and tell us how right we are."
www.heavyplanet.net/2017/03/lp-review-relic-by-forming-void.html

Coming from Lafayette in Louisiana, FORMING THE VOID unerringly steer "Relic", their second full-length album, through vast sonic worlds like the wizard on the front cover is riding his monolithic rock through infinite space and time. All tracks switch my brain off and let me hop on the journey, making me glide with wide spread wings on the majestic sound the grandmasters of blues, psychedelic, heavy rock, stoner and doom have given to us. FORMING THE VOID picked up the very best to arrange an amazingly atmospheric, always spaced-out, vocally catching, pointedly ethnic and crushingly heavy album that is delivering a crispy modern sound without ever steppig beside the retrospective path. Listening to "Relic" is like beeing on a perpetual trip of ethereal joy and musical exploration. The final, an interpretation of Led Zeppelin's "Kashmir", is jaw dropping! - SM (Doom Metal Front Zine)
doommetalfront.blogspot.de/2017/04/forming-voids-relic-is-like-beeing-on.html

"Lengthy tunes with lots of catchy riffs and basic, straightforward songwriting are the order of the day here: songs like "Relic" and "Endless Road" ooze with a breezy, effortless classic rock feel, updated of course with de rigueur fuzzball guitars. There is little-to-no variation in tempo or approach, but with a mere seven tracks (plus a surprisingly effective update on Led Zeppelin's "Kashmir") the same-ness of the material doesn't have time to wear itself out on you. Relic is pretty much just a back-to-forward bang your head album, and fans of stoner rock are never short on appetite for no bullshit, meat and potatoes rock & roll… Forming the Void are more crowd-pleasers than innovators. Relic won't make you forget The Sword exist, but they may make you pine for a time when the latter just, y'know, cut the shit." - Jeremy Ulrey (Metal Injection)
www.metalinjection.net/reviews/forming-the-void-relic

"Their second, is shot through with this exuberance – and it makes it a joy to listen to. Let’s be frank: the band have not come up with anything brand-new. In fact their bio references such bands as Baroness and Mastodon and you can hear such influences peppered throughout the album. But what the band from Louisiana, USA, have done, through the injection of melody, their strict “realms of fantasy” approach to songwriting (no obvious political statements here) and sheer gusto, is make an album that soars." -Matt Butler
echoesanddust.com/2017/03/forming-the-void-relic/

"Imagine stumbling onto a time machine in some dusty, forgotten corner, but it can only take you to 1972 or 1993. That’s the vision Louisiana wizard-rockers Forming The Void have created on this big ol’ chunk of slumbering, lumbering slabbage.

It’s the kinda thing that only dudes who haunt record stores all day would create: a towering, majestic ode to their old Captain Beyond records and Alice In Chains cassettes. It’s a juicy, smoky, doom-rock sandwich laced with crackling neo-grunge and a bucket of slimy green southern-fried sludge.

It ends with a delightfullybananas, acid-engorged cover of Kashmir and the rest of it sounds a fully bearded Melvins geeking out on King Crimson for seven or eight minutes at a time. This is either shrug-worthy or the best news you’ve heard all week, depending entirely on your opinion of the first six Sabbath records. It’s called Relic on purpose, man." - Sleazegrinder (Classic Rock Magazine)
teamrock.com/review/2017-03-27/forming-the-void-relic-album-review